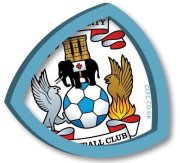 G W Jackson are delighted to announce that they are now a Sponsor and the Official Stationary supplier to Coventry City football club.

G W Jackson began life in 1945, initially as a supplier of Office machinery and maintainence services. Over the years The Company has grown to encompass all aspects of Office Supply and become one of the leaders in their field.

Coventry City were formed in 1883 as Singers FC, becoming Coventry City FC in 1898. They Joined the football league in 1919, and beat Tottenham Hotspur in 1987 to win the F.A Cup. In 1981 HighField Road became Britains first all seater stadium.